The Japanese zoos are spoiling their capybaras again! Suddenly my capybara news feed is full of watermelons! According to jiji.com, this is what it’s all about:

“On “Watermelon Day” on July 27, 2022 (Wednesday), Izu Shaboten Zoo, Nagasaki Bio Park, Saitama Children’s Zoo, Nasu Animal Kingdom and Ishikawa Zoo will collaborate with each other on the “Capybara Pick ★ No. 1″ The 7th Capybara Watermelon Eating Competition ”was held.”

As always, translations by Google, warts and all.

Some of the funniest google translations are Japanese to English. Does that sound like Japan is holding a watermelon eating contest? The video at this link explains it all– in Japanese. Somehow, I understood most of it, and was fun to watch in spite of the foreign chatter. And in spite of the fact that Asuka came in 4th place out of five. By far the best video if you only have time for one.

This is what it says below the video:

There is another video below, but the one on this page caught her entrance to the contest stage which is absolutely precious. Koharu might be slow, but she won my heart.

Here is the English translation from that page:

At each zoo, Capybara shared the time it took to finish eating watermelon and competed for the speed, and a 5-year-old female “Koharu” participated from the Nasu zoo.
When about 500 grams of watermelon was placed in front of me, Koharu, who had been waiting to eat, immediately caught on and started measuring the time.
However, Koharu was just around the corner, and she was absorbed in sucking the spilled watermelon juice, and it took 8 minutes and 48 seconds to finish eating, and she was in the bottom 5th place.
In addition, after the competition, a feeding experience was also held, and the children enjoyed giving the watermelons on the sticks to the capybaras in the park.
A second grade girl from Tokyo said, “It was a fast-eating competition, but it was cute to see capybaras eating slowly.”

One capybara representing each of the “capybara watermelon fast-eating competitions” in which five zoos nationwide participated to revitalize the zoo during the summer vacation competed for the speed of eating about 500 grams of watermelon. This is the 7th time the event has been held, and Kona-kun, a male who finished 3rd last year from Bio Park, is the 3rd challenge. . . At Bio Park, you can see capybaras eating watermelon every Sunday from 1:30 pm until August 21st. 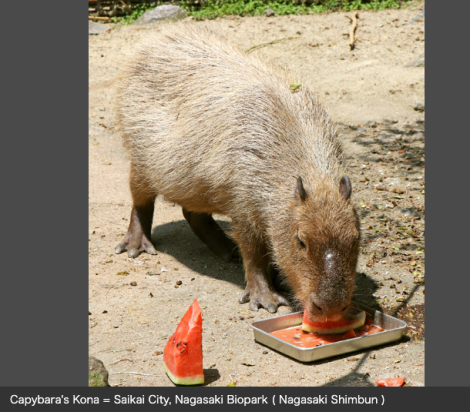 Okay then, at least at Nagasaki it isn’t a one-shot deal. Every Sunday through the summer, they eat watermelon. 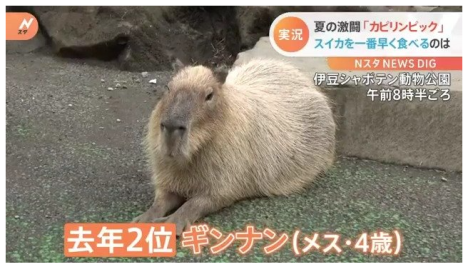 “Ginnan” (female, 4 years old), who will be participating for the second time in a row for two years, participated in the race and finished third in 2 minutes and 37 seconds.” 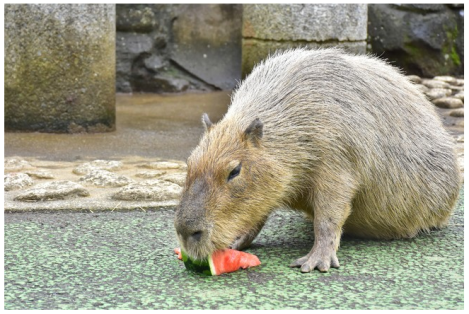 “Ginnan, who is a glutton and accustomed to people, was unfortunately second last year. I have been practicing eating watermelon in preparation for the actual performance. Although the ranking dropped this year, he improved his [sic] self-record significantly from the previous year’s 3 minutes 29 seconds.” 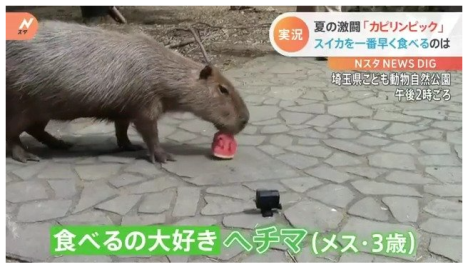 Here is the top ranked watermelon eater in Japan- Luffa! Look at her go! Fast forward to 6:00 if it’s all you do today! Boop!

The Championship Standings for 2022: 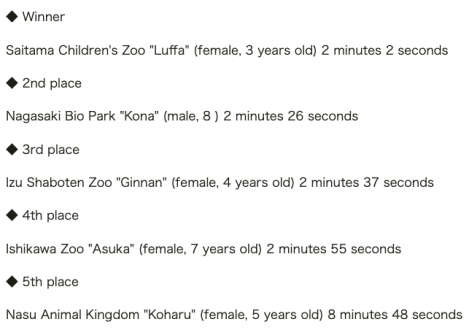 These are the competitors, aren’t they cute!

For diehard capybara fans who have made it this far- there’s a funny little video here that’s worth watching. You don’t need to know any Japanese to pick up on the narrator’s enthusiasm, and the video is a tidy overview of the entire event.

Not invited to compete, this private zoo decided to spoil their capybaras, anyway! Nice that these capybaras will benefit from the event.

” For the purpose, we will hold a “Kapibara Watermelon Party” in July and August for a total of 3 days to give watermelons that have a lot of water and are a favorite.” 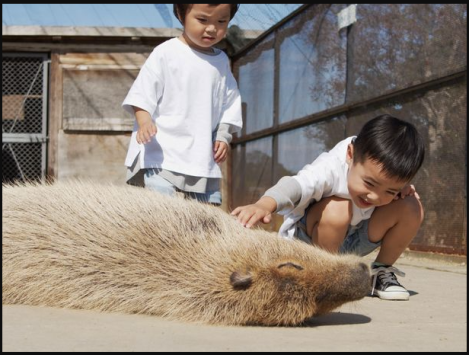 “Capybara is the largest mouse in the world.”