Here’s another great article from South America showing that capybaras are well positioned to take over the world.

The original post is better, of course, if you read Spanish. If you don’t, feel free to suffer through the Google Translate version I put together.

Capybaras took over the Lagoon of the Fathers

Dozens of these animals that became a trend on social networks, took advantage of the stillness in the lagoon located kilometers from Mar del Plata [in Argentina] to fully enjoy nature in the midst of the quarantine, with no humans around.

The Laguna de los Padres, the natural lagoon located a few kilometers from Mar del Plata, was filled this weekend with dozens of capybaras who, in the midst of the quarantine, take full advantage of nature in the absence of people in the place .

Between Thursday and Friday, capybaras became an unusual trend on social networks. Amid the irruption of different animals in the cities from the quarantine that took people off the streets, these friendly rodents became the most important trend in the country and one of the first in the world, accompanied by hundreds of memes, jokes and messages created by users.

Mar del Plata could not be left out of the fury generated by these animals and just as the sea lions “appropriated” the streets of the Port in Banquina de los Pescadores, in Laguna de los Padres, where the circulation of humans is practically nil and the entrances are closed, the capybaras went out to take advantage of the goodness of nature.

Although it is common to see them in this area, next to the lagoon, capybaras tend to move away from humans, preserving their space. Now, in the midst of the quarantine and without anyone bothering them, they walk peacefully through this nature reserve.

Next to the lagoon, on the paths, between the plants, on the nautical pier and between the extinguished stoves. Everywhere. In pack or alone. Mostly in a group. They walk, run, feed, play and walk the Laguna de los Padres, their place in the area, with absolute freedom. 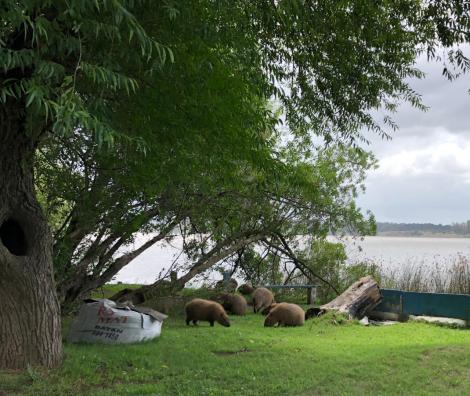 The capybara is an animal of the family of the cavids. It is the largest and heaviest living rodent in the world. On Thursday, a Twitter user propelled the moment of glory for this species by publishing a game to define “what kind of capybara you are”, which works like thousands of other games with a name according to the month and day of birth.

After that, thousands of users published their result and the result were jokes, memes, people saying they wanted to adopt a capybara, and even Santa Fecinos remembering a local TV character who represented a capybara, among many other messages.

[You will have to click through the link at the bottom to see the memes. They aren’t translated but they are worth the click! I just couldn’t pull them into this blog.]

In Mar del Plata, capybaras usually prowl mainly in two areas: in the Puerto Natural Reserve and in the Laguna de los Padres, due to the flow of water in these places.

And it is that although they can live in different types of habitat, capybaras show a preference for some in particular, such as near lakes, rivers and lagoons, ideally with thick vegetation that serves as protection. They feed mainly on land grass and some aquatic plants.

They live in groups, which may consist of a couple and their young, or a larger group of adult specimens. The size of the groups varies between six and twenty animals.

Capybaras are mainly twilight animals. They spend the heat of the day in holes in the mud or in the waters. To sleep they hide in thick vegetation; they don’t need a cave. Instead, in areas where they are disturbed by human activities, they change and adopt a night lifestyle. 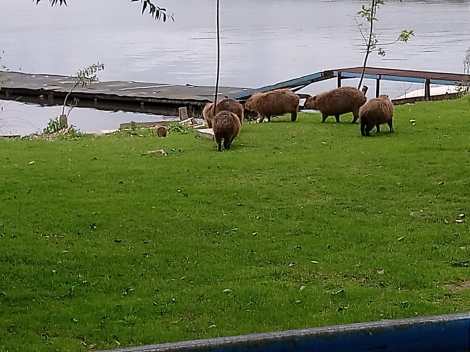 This particularity has changed substantially since the social, preventive and compulsory isolation came into effect as a result of the Covid-19 pandemic.

People circulate much less on the streets. In the Laguna de los Padres, a green space for recreational and tourist use mainly, the absence of humans encouraged the capybaras to regain ownership of the nature that now surrounds them without schedules, limitations or the need to hide.

Please follow this link to the original article, in Spanish. That’s where the funny memes are.

Translation provided by Google (that explains everything) so please let me know if there are any serious bloopers here!