I’m finally getting used to being six, and now I found out I’m going to be seven tomorrow! Why does everything keep changing? At least it isn’t as crazy as my first year! I have some baby pictures to prove it. 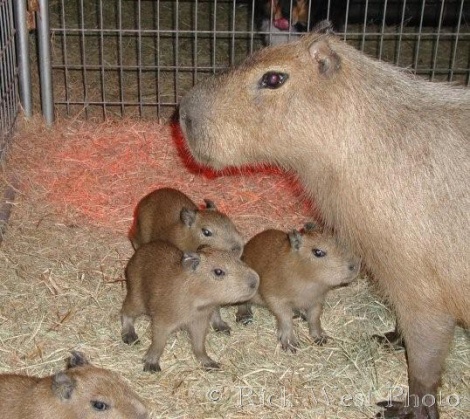 We’re 5 days old in this picture.

I was born in Texas on Valentine’s Day, 2009. Bonnie and Clyde were my parents and I was the littlest of the four babies. Not a runt, though.

I still drink milk, but out of a bowl like a big boy.

Because I was little, I got extra milk from a bottle. I was always the friendliest baby, and all that extra attention meant I got super spoiled. One of the highlights of my life was meeting my famous big brother, Caplin Rous. There’s even a video of this momentous event! (I’m the baby that everyone is holding.)

I’m a month old, and so busy eating birdseed (it fell out of the cages above) that I didn’t even see those delicious baskets behind me.

I arrived home in perfect health and pretty much took over the Funny Farm. In the photo above, check out the tiny shopping cart in the background, and the height of that shelf behind me. You will see those again. 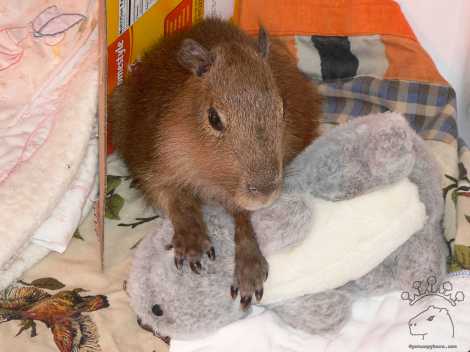 I had a “man cave” made out of an Eggo waffle box. I also had a stuffed rabbit and a crusty nose.

After I was home for a couple weeks, I suddenly got sick, collapsed and almost died. Then I developed liver failure. I stopped eating, had to take medicine, and lived in a BATHTUB for a while. Boring. 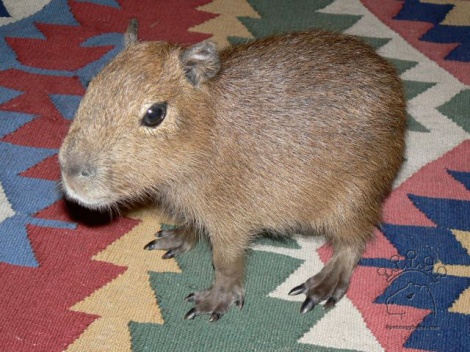 I grew up to be big and strong, but that’s why I think people should weigh their baby capybaras. We look fabulous even if we aren’t healthy. It took me 6 months to catch up to a regular weight after nearly dropping dead. 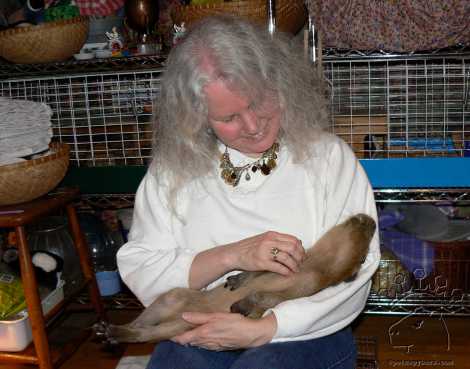 I was cuddly and had good manners, so I was allowed to wander all over the house. I still remember that time as The Golden Age, and try to bust out of the kitchen every chance I get. 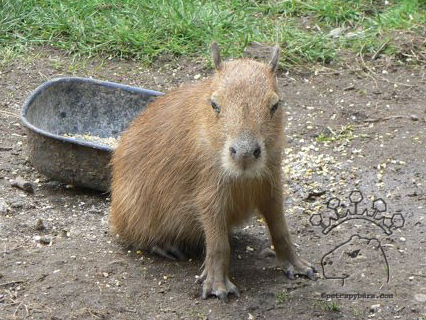 Here I am, guarding the corn dish.

Once I was feeling better, I got to go swimming and play with rabbits and chickens. Plus, summer happened, for the first time. I’m glad I didn’t know then that it would come and go. What’s up with that, anyway?

I prefer the outdoors, where the blazing Seattle sun toasts my fur, and smelly nature tickles my nose.

By 5 months old, I was big and strong. This is about when I started to get naughty, though. I slept inside, on blankets right next to the Farm Manager’s bed. The minute I would wake up in the morning, I would make peepee on my blankets, because I didn’t like to use my inside potty bowl any more. So I started sleeping outside. I still don’t like to sleep inside, though I miss chewing that bed ruffle.

I have an outdoor bathtub, too, but I refuse to get into it.

I ate most of my little flimsy kiddy wading pools, but I never did bite a hole in this bathtub. I would probably overflow the water if I could make it in to that tub, now. During the day, I still had the run of the house. Except for the morning accidents, I still used my indoor potty bowl, especially for Number Twos. 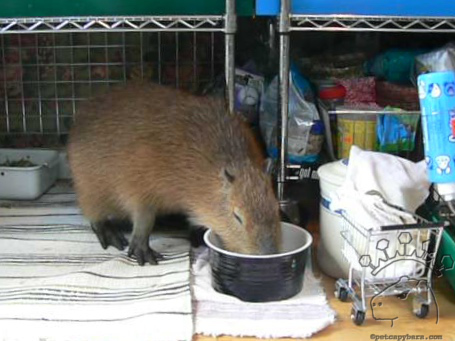 Look at the shopping cart, now! See the low shelf? I can’t believe I could walk right under it!

I like sleeping outdoors, but nobody had told me about SNOW! A huge oversight, so I made certain that my opinion about winter, cold rain, ice, and snow were well known. It didn’t help, and the Farm Manager did NOTHING to stop the bad weather. All she did was take out the lower shelf on the left by the heat vent. This was supposed to make up for the fact that I had now lost most of my house wandering privileges. 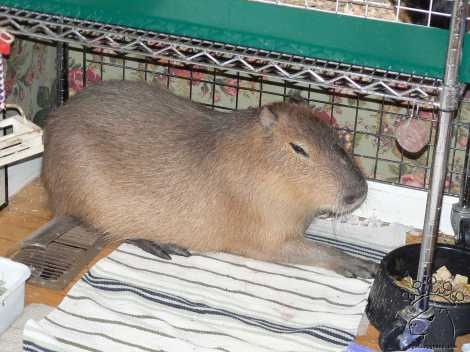 At 10 months old, I could still stretch out sideways under the guinea pig cage.

By the time my first birthday rolled around, I was looking roly poly at 77 pounds (35kg). That’s about average, and means I had probably caught up with my brothers and sisters. It’s only 60% of my weight, though because capybaras keep on growing well past their first birthday. I hit 125 pounds after my 4th birthday and though I can bounce on the scale and make it go up to 136, I’m really about 130 pounds (60kg).

Have one last look at the shopping cart and the shelf!

So what’s happening for my birthday? First, NO HATS. I want a sunny day, but I hear that’s on backorder. Corn-on-the-cob. Maybe a hot tub. I’d like to share some seeds with my hens. Chase a cat, maybe. That’s really all I want. A normal day.

One response to “My First Year”