I am still melancholy about Brazil and enjoy tracking capybaras in the news from there. They do love their capybaras, and appreciate their unique quirkiness so much! I love these little stories and hope you do, too. I translate them using Google, and then fix them up so that they actually make sense. Feel free to translate them yourself from the original Portuguese. I always provide a link at the end of the story. You’re really just looking at the pictures, though, aren’t you? Thought so.

A family of capybaras enjoys a stroll at Catalan Dam. Thirteen animals were quietly hanging out  in a busy area of the city. Despite the harassment, the rodents took the day to feed. 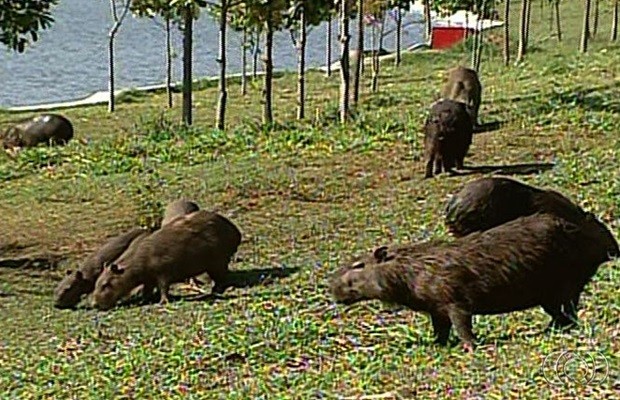 A family of capybaras appeared on Thursday afternoon in a reservoir of Catalan within the state. The 13 animals roamed the area, which is very busy, without being bothered by human presence.

Many people stopped to watch and take pictures of the animals, who took the day to feed.

The dam where the animals have been seen is less than a mile from a reserve of cerrado, which is probably where they live.

The capivara, also called capybara in some regions, are rodents. They feed mainly on grasses and herbs. In some countries, animals are captured and slaughtered as bushmeat. However, in Brazil, the practice without a license from the authorities is considered an environmental crime.

I couldn’t embed the VIDEO, so follow the link to see a short video of capybaras grazing in Brazil!