Several videos have surfaced lately of animals retaking their territory, now that we are hunkered down, indoors.  Goats in Wales, penguins gone rogue. Here are some capybaras who have retaken territory stolen for a golf course in Bolivia. The best part is the video, so scroll down for that, if you’re impatient. 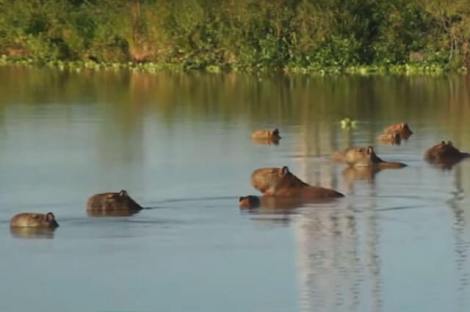 Here’s a rough translation of the information that accompanied the photo and video:

These giant rodents made it their resort and they enjoy their prairies and lagoons as a family.

To speak of a resort for capybaras would have been unthinkable before the isolation to which humans were subjected by the coronavirus. However, today it is a reality.

At least forty of these animals took back the land of the Urubó club golf course, in Santa Cruz de la Sierra, in Bolivia.

The capybaras, also known as chigüiros or carpinchos, have grazed on the field and taken long baths in the lagoon of the golf club.

A scene that we will hardly see again after the coronavirus quarantine passes, a confinement that has left postcards of a liberated nature.
By: Noticiascaracol.com

The golf course is the green bit in the middle. That brown stuff is the river. Where would you hang out?

Because I’m curious, I googled this golf course. I also went to the facebook page, where people were appalled that the golf course had destroyed habitat and how dare they claim to be preserving the local ecosystem? They had a cute photo of a sloth and some outrageous anteaters running amuck over the golf course.

The golf course is located under that red pin at the extreme top left of the photo, teeny tiny at this scale.

I zoomed out and Holy Toledo, look at that town! Yikes! So now find that golf course, again. You can compare the river and the bridge across it, in order to orient yourself on this bigger picture. So, actually, the golf course is a tiny parcel next to some very large natural areas adjacent to a big blight of a city. That’s a pretty hard edge to the big green conservation areas next to the river, no accident. It looks to me as if they have been very deliberate about preserving habitat, because that city would be all over that river, given a chance. And the golf course is a pretty inconsequential portion of the habitat area. So, my twenty-five cent opinion is that, all things considered, Santa Cruz de la Sierra is doing okay by the native animals. Maybe not so good with the humans, and yet they are in quarantine and so maybe ahead of, for instance, Miami.

Are you ready for the video? It’s great!