In Part Four, Prince Dobalob learns the difference between a blimp and a zeppelin. We could have warned him about ordering stuff online.

Wait a minute! Part Four? Did you miss the beginning of this story? 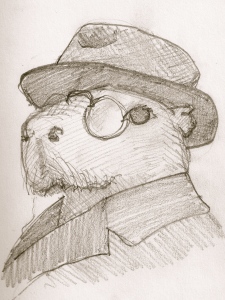 Prince Dobalob was startled right off his red velvet cushion with the gold braid by a huge thunk and tumble beyond the entrance hall to Bolabod Palace. There was an audible whirring and grinding of gears in his giant skull that produced a sparkle and glow behind his big brown eyes. “My blimp order! Yes sirree, that’s the beauty of expedited shipping! Rodney come here!” He shouted to an empty hall because the exodus has been so complete, but the millwright came running, followed closely by the butler and valet. They observed the upturned cushion and the very excited and very poufy capybara, but there seemed to be no other evidence of an exciting turn of events.

“I ordered a blimp on the Internet and it has just arrived! I think. Let’s go see it!” Prince Dobalob led the slightly irritated and out of breath group to the heap of boxes outside the palace.

Rodney was muttering under his breath, “Blimp? He goes and orders a blimp? What about the zeppelin we are supposed to build? Is that off the boards now? He does this to me every single time! Blimp, I should have known. A cheesy kit no doubt, too, and I suppose I will have to put it together somehow.” Mutter, grump, and whine.

Kipling was silently cursing the IT manager, whose job it was to monitor, well, everything. Maybe it was too much to ask Moneypenny to track all Internet activity in addition to his grounds security maintenance monitors, and all of the activity within the palace, too. True, they had discussed the Prince’s propensity toward absurd Internet purchases late in the evening, and that was prime time for the flying squirrel to be able to actively monitor them. Just what was the IT Manager supposed to do once the “Buy It Now” button had been pushed? After all, the Prince had unlimited means to buy what he wished. He muttered, grumped, and whined.

Vince, the new kid on the block, was ecstatic! He twisted and untwisted his whiskers in deep contemplation. He could hardly constrain his excitement, but he sensed that his companion staffers were not pleased. Well, this was going to be fun, he thought, no matter what the others thought!

The rodent quartet reached the mountain of brown paper, large and small packages, plastic shipping bags, and a half dozen very long tubes, all heaped upon several pallets of large boxes wound tight with plastic wrap. None of it looked at all like the out-sized watermelon-shaped balloon in the picture on the Internet. A wheezy elongated sigh escaped the capybara as his cheery countenance settled into an unusually wrinkly and worried expression. The beaver looked very smug, the mountain beaver looked both bemused and relieved. The vole looked from one to the other, aware that the mind-reading course he had just completed was a complete sham. He had no clue what was going on.

Prince Dobalob forced a smile and faced his staff. “This blimp will be our transportation to my Mother’s birthday party. Furthermore, it will serve as my headquarters during the event, so that I may retreat at will, spending as little time partying as possible. Rodney, make it so!”

Rodney the Millwright turned right around and shouted over his shoulder as he trudged down the corridor. “I think the naked mole rats can handle that.” Kipling the butler wagged his head slowly back and forth as though he was folding beaten egg whites into a cheese soufflé. Vincent the valet paced a tiny circle, frustrated that his newbie status meant that he didn’t know what was happening and that no one was explaining anything to him. Moneypenny the IT Manager glided down in a lazy spiral from the upper branches and landed on the shoulder of the butler. The much larger rodent had been expecting her, the heaped packages no doubt triggering an alert on the REDTASQ System. The flying squirrel looked about, noted the retreating millwright, the pacing vole, and turned toward the frothy butler.

Even though this was not a large team, the mix of personalities was not conducive to linear design processes. In other words, in spite of the talented millwright, the hardworking naked mole rats, the oversight of the efficient butler, and the tracking efforts of the diligent IT Manager, Prince Dobalob mixed everything up, every time. He would change his mind every time he opened a book, went online, received a text, or overheard a technical conversation. He would have each team member working on the exact same item, or he would have each working independently so that the pieces could not possibly connect. It was not that the Prince had bad ideas, in fact, he was a very fine inventor. Everyone loved working on his projects because they were so forward thinking, but the Prince was so creative that “forward” could be very loosely defined. “Every which way” might be the better way to state it. Of course, this was partly a result of the vast quantity of ideas the Prince might promote. You might think there is only one way to make an umbrella from some banana leaves, but one breakfast time request had resulted in dozens of prototypes at lunchtime, and an exhausted staff. It is possible that a single well-designed umbrella would have sufficed, but the Prince had individually encouraged each craftsman, none of them aware of the other workers. Dozens of umbrellas are kind of funny, and we’re all chuckling about it now, but dozens of blimps and/or zeppelins being built around the palace grounds would not be amusing.

Prince Dobalob was tempted to follow and supervise, but he knew that his blimp was in competent hands. He turned to Vincent, who was now on duty. “Do you think Rodney was perturbed about my blimp kit? He didn’t seem too awfully impressed, and just turned it right over to the naked mole rats without even looking at it!”

Vincent, who had completed the diplomacy portion of his coursework, mulled over the answer before replying. “Sir Rodney had been working on Zeppelin plans all night. I think he is a bit overtired, but he seems very enthusiastic about the Zeppelin project.”

“Oh, that. But we have a blimp kit now, and it will be ready really, really soon! Blimp, zeppelin, what’s the difference? The main thing is that I will have a spectacular entrance and an extremely convenient exit for my mother’s birthday party! This is a perfect opportunity to show my parents how mature and responsible I am!”

Vincent took a deep breath before answering. He knew better than to discourage the Prince from the blimp project. That had a way of backfiring because The Prince would only stick to his blimp plans like duct tape sealing over a plastic box. The Zeppelin project had legs of its own, now that Rodney had a carton of sharp new pencils and a stack of clean notebooks. Rodney would build the zeppelin come hello or high water. That the two projects would eventually collide was a reality the valet must start to prepare for. “Let’s go Google blimp and zeppelin and see if we can figure out the difference.” And under his breath he muttered something about scrum masters and the Better Business Bureau and whether blimps should even be available for purchase on the Internet.

“Yes! Let’s check it out,” said the Prince. “I hate it when that smarty pants Rodney knows more than I do!”

The little vole stifled a gasp, but obediently followed the portly capybara to the library. In addition to walls of book filled shelves, the library boasted several state of the art computers with large and small monitors, a selection of keyboards in several languages, mice and pens and cupboards full of laptops and tablets. Moneypenny had a generous budget. Moneypenny also had monitors of her own and keystroke recorders so that the capybara’s activities could be traced. There had been some bizarre purchases, and while this was not discouraged, it did serve to protect the staff who might be later accused of making the purchases themselves. When the Prince’s memory failed him, it was helpful to produce a record of the transaction. Prince Dobalob had once accused the little duck maid of purchasing seventy surfboards, in every size, configuration, and color imaginable. She was appalled and quickly pointed out that several of the staff had an interest in water sports. “It might just as easily have been Rodney!” Surely, though, there is only one resident who would have placed such an extravagant order, and then, of course, have it shipped directly to the palace doorstep. Now they made a charming fence around one of the smaller swimming pools and Rodney had even fashioned some matching benches.

The difference between a blimp and zeppelin, while insignificant to a dilettante like Prince Dobalob, is perfectly obvious to a connoisseur of aircraft like Rodney. Moneypenny, being a nerd of all trades, had started preparing a table of the differences by the time they reached the library. Seated in her treetop library office, the data was displayed on the large monitor beneath her. Sometimes it was convenient to allow the Prince to wallow in his own research, especially if it was important to prevent him from meddling in something more critical. Usually, though, the resulting chaos was uninterpretable and very frustrating to The Prince. His haphazard methods were quite at odds with his own self-image, and a disappointed Prince was of no use to anyone.

Moneypenny soared down to Prince Dobalob’s sloping shoulder and clung to his cravat. Offended by the pink and orange paisley, the flying squirrel reconsidered and scampered down to the big oak desk. “Does this comparison help?”

Sobered by the differences, and contemplating the dubious quality of his little Internet blimp, Prince Dobalob sat quietly for a moment. Then he rose off his red velvet cushion with the gold braid and walked over to a nose tickler– in this case a pair of mis-matched socks– and rubbed his morrillo. Suddenly, the clumsy Prince spun around and charged out toward the naked mole rat workshop. The flying squirrel deftly plucked swirling papers from the air, the vole intercepted the dropping laptop before it hit the ground, and the duck maid drifted through an open window in time to stabilize a pencil box on the desk.

The indispensable Cast of Characters: 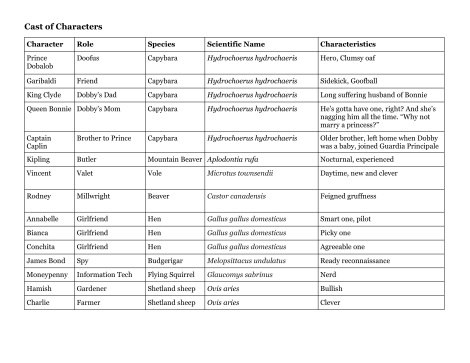 One response to “Prince Dobalob Builds a Zeppelin (Part Four)”