BlogPaws, an organization for pet bloggers, held the 2014 conference in Las Vegas. Melanie Typaldos and I have attended for four years, but this is the first time a capybara has attended! Thank you, Georgi Davisson, for driving Mia up for the conference! And thank you, Ken the Bug Guy, for caring for their other two capybaras, Colonel Cobb and Enola Gay, so that Georgi could attend! 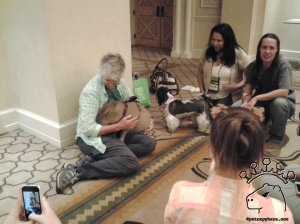 Mia immediately decided that Melanie was her best friend. As roommate and Official Assistant Wrangler, I was a poor second.

On the other hand, waking up to Mia’s little voice was unforgettable. She’s a real talker! 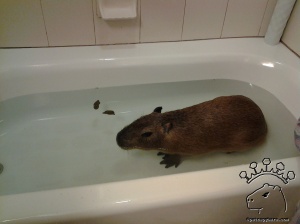 Yes, you guessed it!

She was very tidy, but we did decline room service for the duration!

Back at the conference, Melanie and Mia held court between sessions.

Lunchtime for Georgi and Mia

Meeting Georgi and Mia for the first time, we were impressed with her poise and demeanor. Georgi is pretty amazing, too!

All eyes are on Mia!

Everywhere we went, Mia was the star! Here she is with Greta Russo!

Such a good little capy!

But mostly, Mia was with Melanie. 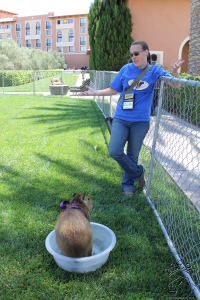 But of course she’s good!

Other times she was with Georgi.

A 6 month old capybara is still a baby, so little Mia also spent plenty of time relaxing away from the crowds and attention. 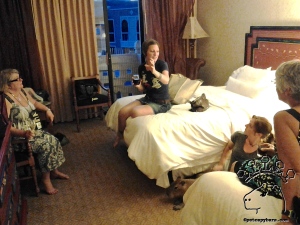 Mia was just one of the girls. She really was perfectly behaved at all times. (This is not typical capybara behavior at all! I can refer you to some realistic capybara behavior examples . . . any of Dobbye’s blog posts, for example.)

The Westin at Lake Las Vegas had some great firepits at night and Mia joined us there, too.

Saturday, the last day of the conference, Mia was ready for some spectacular water play. 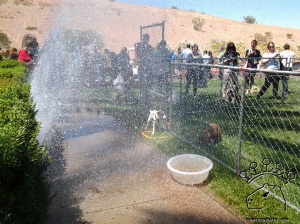 On cue, the sprinkler system failed, creating a geyser that flooded the lawn and turned the grassy dog walking area into a capybara dream come true!

Even a napping Mia is worth a couple photos.

Okay, so she could be naughty, but she was really, really, good, by baby capybara standards.

Spa time before the big night!

The bathtub in our room was full of water most of the time.

When she grows up, she is going to be a very elegant capybara. In these photos, she is about 6 months old and around 39 pounds (17 kg). She’ll be full grown in another year and should eventually weigh between 120 and 150 pounds (55-70 kg). Mia is participating in the ROUS Foundation Why Weight? program .

All capybaras seem to do a lot of napping. Mia managed to maintain her position as “Center of Everything” even while asleep.

Dinnertime for Melanie and Mia

Mia seemed to do a lot of eating, too. I predict her eventual weight will be in the high end of that range, and females often weigh more than the males.

Congratulations to the ROUS Foundation!

We didn’t let Mia eat the check, even though it was big and green!

The end of a busy day with Georgi and Becky

By the end of the conference, Princess Mia had adjusted nicely to the hotel room, the bathtub, her tiny balcony, and the constant adoration.

As we prepared to leave the conference, Mia helped Melanie take a photo of the gigantic donation check! Thank you again, BlogPaws, for the very generous donation to the ROUS Foundation!

3 responses to “BlogPaws 2014 or The One With The Capybara”