Oh sure, the capybara is a species of “Least Concern” but that doesn’t mean they are invincible, like cockroaches. It just means they aren’t yet as endangered as elephants or monarch butterflies. Or humans, at this rate.

Recently in Argentina, a modest herd of capybaras reclaimed territory in a posh residential neighborhood. Of course, people moved to the area because it was “natural” but now that wildlife has returned to eat the shrubbery, they are appalled. There were a bunch of news reports about this callous indigenous invasion, and I’ll provide links below. Curiously, these articles are in English, not Spanish. Be sure to check out the videos, they’re always the best part. Here we go!

It’s the Invasion of the Capybaras!

Capybaras have invaded an upscale Argentinian neighborhood, leaving poop in the streets and allegedly attacking pets in the area.

“This is exacerbated by the fact that we continue going forward with urbanizations over natural environments that it might not be fine to do so, even more in the case of wetlands,” Sebastian Di Martino, conservation director of the Rewilding Argentina Foundation, told Reuters.

Capybaras are semiaquatic mammals found throughout almost all countries of South America except Chile. It is the largest living rodent.

Buenos Aires (dpa) – Hundreds of capybaras – large amphibious rodents – have descended on a wealthy Buenos Aires suburb, digging up gardens and causing traffic accidents, according to media reports from Argentina.

Capybaras are related to guinea pigs, are twice as big as beavers and are considered the biggest rodent on Earth.

These semi-aquatic mammals live in wetlands – like the gated community at Nordelta north of Buenos Aires, situated along the Parana river.

Residents say the capybara population has exploded recently. Since they can no longer find enough food in public green areas, they are now invading local gardens as well.

“I think the capybaras are great, when I saw one for the first time, I was very happy,” Gustavo Iglesias told the La Nacion newspaper.

“The problem is that they reproduce uncontrollably because they have no natural enemies here,” he said.

The capybaras, called carpinchos in Argentina, have divided opinion.

The left-wing side of the debate often points to the phenomenon of the animal intruders as a campaign of revenge by nature against wealthy human residents.

Juan Grabois, a popular social activist, tweeted in support of the rodents. “At the side of the Carpinchos – always until victory,” he tweeted.

“We do not want to exterminate the capybaras, but we want to restore a balance in which no one has to fear for their safety,” local residents said in a statement.

The capybaras do not allow rich Argentines to live in peace.

Many Nordelts are so annoyed by their new neighbors that they are ready to shoot them. But this is prohibited.

Residents of the elite village of Nordelta in northeastern Argentina faced an unusual problem: capybaras appeared in large numbers in the area a few weeks ago, they eat the vegetation, leave excrement everywhere and even bite the dogs, writes the British Guardian newspaper.

Local residents are not happy with such a neighborhood, but it is forbidden to drive or shoot them. At the same time, ecologists claim that rodents are not invaders ̵

1; they returned to their homes, as the village was built on the site of wetlands, where these animals have long lived.

In 1999, despite protests from environmentalists, they began building an elite village fenced off from the outside world for wealthy Argentines who wanted to live close to nature, against the backdrop of numerous lakes and streams. Today it is known as Nordelta. As of 2014, there were already 25,000 people living here.

I never thought I’d be alive to see the capybaras tame the keto and fight the mother of all battles in Nordelta.

Enrico Viale, one of the most famous Argentine environmentalists, hopes that the invasion of the capybara will draw attention to the destruction of the precious wetlands of the country.

These ecosystems are affected not only by the construction of elite villages, but also by the expansion of agricultural land for soybean cultivation and grazing livestock.

As a result, many species are deprived of their habitats and the soil absorbs less moisture, which increases the risk of floods and fires.

Earlier in Kharkov, wild foxes were sighted in the subway and in the courtyards of residential buildings.

You know how capybaras always seem to have a slightly skeptical look on their faces? Turns out what they’re skeptical of might be rich people’s bullshit. Now, in Argentina, they’re fighting back. Groups of the charismatic rodents have been causing a ruckus in the fancy-pants gated community of Nordelta, crapping in the streets and hacking up manicured lawns like magnificent little punk asses.

Naturally, the hoity-toity residents aren’t too thrilled about being the objects of the animals’ scorn. Capybaras, known locally as carpinchos, are the world’s largest rodents, measuring up to 3 feet (1 meter) in height and weighing as much as 175 pounds (79 kilograms). They can do some serious damage stomping around a garden, and they’ve also apparently bitten Nordelta residents’ dogs.

Some residents have reportedly brought out their guns to ward off the animals. But if we’re picking sides here, I stand with the capybara comrades. The rodents are native to the region where Nordelta now stands, in the wetlands of the Lujan River Delta near Buenos Aires. The fancy community was just erected there in 2000. Experts say that means this can hardly be considered an invasion. Instead, it’s a reclamation project.

“It’s the other way round: Nordelta invaded the ecosystem of the carpinchos,” esteemed ecologist and activist Enrique Viale told the Guardian. “Wealthy real estate developers with government backing have to destroy nature in order to sell clients the dream of living in the wild—because the people who buy those homes want nature, but without the mosquitoes, snakes, or carpinchos.”

Hordes of capybaras have taken up residence at a gated community, sparking a debate on the environment and inequality 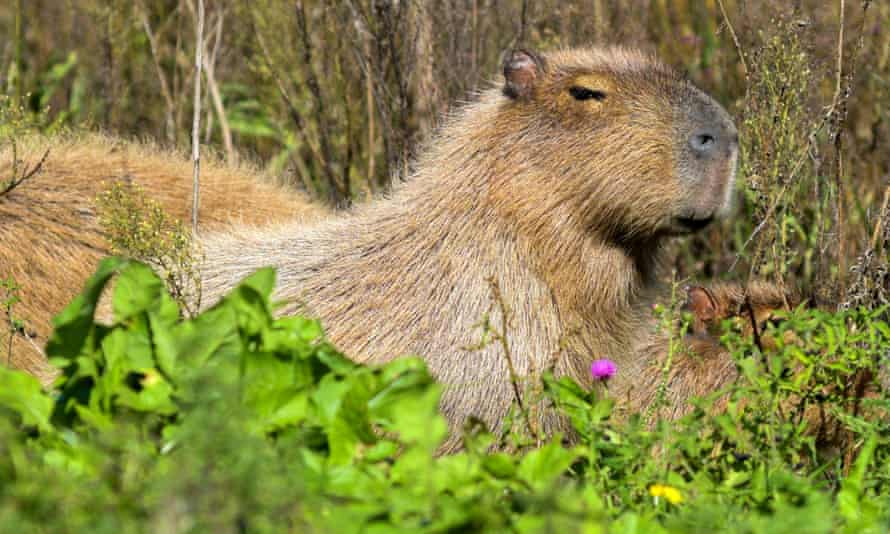 Capybaras, known locally as carpinchos, are the world’s largest rodent, standing over one 60cm tall and weighing up to 60kg. Photograph: Mara Sosti/AFP via Getty Images

Nordelta is Argentina’s most well-known gated community: an enclave of spacious homes for the rich amid a dreamy landscape of lakes and streams north of Buenos Aires.

But environmentalists question its very existence because it is built on the wetlands of the Paraná, the second most important river in South America after the Amazon.

Now, however, nature is fighting back against Nordelta’s well-heeled residents.

In recent weeks, the community has been invaded by capybaras, who have destroyed manicured lawns, bitten dogs and caused traffic accidents.

“They not only destroy gardens but their excrement has also become a problem,” one local man told the daily La Nación, complaining that local wildlife officials had prohibited residents from touching the large rodents.

Some Nordelta residents are reported to have responded by bringing out their hunting rifles, but many other Argentinians have taken to social media to defend the rodents – known locally as carpinchos.

In politically polarized Argentina, progressive Peronists see Nordelta as the enclave of an upper class eager to exclude common people – and with tongue only partly in cheek, some have portrayed the capybaras as a rodent vanguard of the class struggle.

“My total support for the Peronist carpinchos of Nordelta recovering their habitat,” tweeted one internet wag.

Adult capybaras can grow up to one metre (3.2ft) in length, stand over 60cm (24in) tall and can weigh up to 60 kilos (132lb). They are naturally gregarious and live in groups of between 10 and 20 individuals.

Prominent ecologist Enrique Viale said it was a mistake to frame the rodent influx as an invasion. “It’s the other way round: Nordelta invaded the ecosystem of the carpinchos,” said Viale, who has been campaigning with many others for 10 years now for congress to pass a law to defend the wetlands from development.

“Wealthy real-estate developers with government backing have to destroy nature in order to sell clients the dream of living in the wild – because the people who buy those homes want nature, but without the mosquitoes, snakes or carpinchos,” he said.

These vast Paraná wetlands stretch from northern Argentina to the River Plate and the Atlantic Ocean, but have come under attack from urban sprawl as well as cattle and soy mega-farmers who are partly responsible for the wildfires that have destroyed vast areas.

“Nordelta is the supersized paradigm of gated communities built on wetlands. The first thing it does is take away the absorbent function of the land, so when there are extreme weather events, it is the poorer surrounding neighborhoods that end up flooded. As always, it is the poor who end paying the price.”