Capybaras are vegetarians. To be more precise, they are graminivores: they mostly eat grass. Like wild rabbits and guinea pigs, they graze and eat the unlucky apple or squash they come across. They also eat their poop. It’s a complicated process, turning grass into useful nutrients, and sending it through twice allows their gut flora (healthy bacteria) to break it down. I’m talking about wild capybaras, of course. Capybaras are rodents, and like other rodents, when they are kept in captivity they will eat anything and everything in sight.

Dobby ate this peek-a-boo hole in his blanket. Don’t try to tell me this was accidental.

I wish I was talking about healthy things like watermelons or squashes. It turns out they are kind of picky about food. No, I’m talking about other stuff, now. Hoses, doors and walls, boots, bedding, toys, car upholstery, expensive stuff. 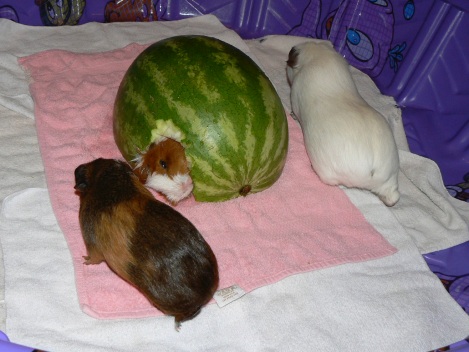 Princess Chili Bean and Twinkie circumvent the watermelon while Alaska fine tunes the entrance. She was a sticky mess, but it was bath day anyway.

Rodent teeth grow continually, so they need to gnaw and chew to keep them from growing too long. Tiny gerbils are famous for shredding paper, more specifically, toilet paper tubes. My most recent rescue “Gerbs” likes hers stuffed with timothy hay. She makes an amazing nest out of it! This isn’t her, but the video refers to toilet paper tubes, as it should. That’s my excuse for including the video, anyway.

Veterinary Practice News holds a yearly contest for what animals have eaten. It’s a bit gruesome, but it’s a good reminder to pay attention to what your pet might get into. Garibaldi, a pet capybara who lived with Melanie Typaldos, once ate a loaf of bread. Bread probably wouldn’t be too bad, but the plastic bag was worrisome. Maybe he didn’t eat it, but the entire loaf disappeared, never to be seen again.

Dobby chewed up so much stuff the list would run right out of the screen at you. He ate the bedskirt on my bed, boots, dozens of blankets (I spent hours mending until I discovered “new ones” cost $1.99 at Goodwill Outlet. Yes, there is an outlet), more boots, he severed a heater cord, and he even took a bite out of my rosewood Eames chair. 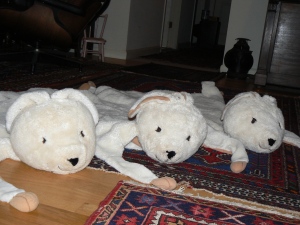 Dobby annihilated his white rabbit rugs, so I got a couple spares. 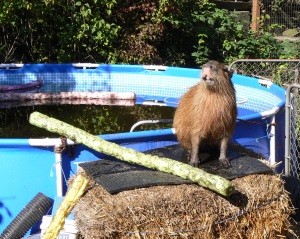 Check out the pool noodle. He chewed it up and spit out the pieces. See how the pool water level is down? Yep, he ate the pool too, and it took a few days to find the bite holes.

Typical Dobster blanket. This one was too holey to sew up.

Rodents are incorrigible, and rabbits are not much better. They aren’t rodents, but they also have continually growing teeth. I once had a hamster who ate his way through my basket of dirty laundry, one teeny hole in each item. My rabbit tore off the wallpaper and kept going through the sheetrock. I had a chinchilla who started chewing the books on the bottom shelf of a bookcase, so I pushed them all back and let him have one he’d almost destroyed: I pulled it out where he would see it first, and that one kept him busy for a couple years.

A fine example of the intricate work of a youthful and enthusiastic pet rat. (photo: Mil Scott)

Mil Scott is surrounded by pet rodents, and shared some exceptional examples with me. The book above was chewed by a pet rat who did not fully appreciate the value of the selected volume. At least my chinchilla kept to the margins and stopped short of eating words. He did chew the covers off of some cookbooks, a project finished a couple years later by a rabbit. 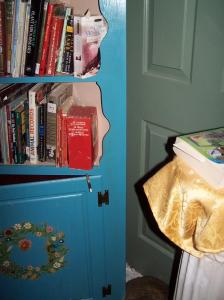 I don’t see any chewing, do you? Ah, but rodents are sneaky. (photo: Mil Scott)

Mil graduated from rats to groundhogs, thereby increasing the magnitude of the damage. I’ll let her explain: “There are two photos for the second chewing sample… this one created by our exceptionally resourceful pet groundhog, Maude.  The bookcase in the (no visible chewing) photo serves as camouflage for the (roughly 8″ wide, 15″ tall) entrance that was chewed into the wall, allowing access to the closet… after entering which, she chewed another hole into the wall between this closet and the one in the next room, where she dragged clothes, papers and plastic bags to create a cozy nest that’s became the official groundhog burrow ever since.” 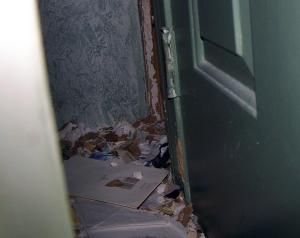 I know you want to meet Maude. Here she is, sitting in her food bin:

Maude. All that food available and she ate a wall.

Poor Mil, finding that hole must have been quite a shock. That reminds me of a joke:

JoeJoe, on the other hand, developed a technique for vacuuming up treats, as if he was a benevolent rodent and not a holy terror. Dobby was famous for pulling bags of birdseed off the shelf, but he’d spill the entire bag, eat a couple mouthfuls and exit. Joejoe is demonstrating the Montessori method here, very neat and tidy.

Here is Joejoe in action:

And to demonstrate that we pay close attention to current events, a couple Cheeto photos.

Nobody is eating cheetos here.

Twinkie, again, this time with carrot juice on her chin.

I’ll leave you with a couple more Joejoe videos where he demonstrates what suburban capybaras do eat.

Special thanks to Mil Scott for her prime examples of what rodents eat. If you liked those, you will love The Rodent Reader Quarterly. Where else are you going to find a magazine dedicated to pet rats?

As always, I am indebted to Cody Kennedy and JoeJoe for the use of his photos and videos. Check out Cody’s shop and Patreon.

The guinea pigs are of former residents at Stacy’s Funny Farm. You can support the curent resident Guinea pigs, Brutus, Cookie Monster, and Danielle, and little Gerbs by shopping at Georgia Dee’s Gift Shop. You can also donate directly to Stacy’s Funny Farm, a 501(c)(3) non-profit organization.