Sadly, I have discovered a need for a new category of news here. We’ll call it Misinformation. Maybe I’m cynical, maybe I’m a nit-picker. I do know that the relative obscurity of capybaras leaves them wide open to speculation. I am genuinely touched by the obvious respect and fondness the Denver Zoo holds for their late capybara Rodrigo. It’s what drew me to the article. The article doesn’t seem too bad, but it does illustrate how easily this misinformation starts flying around. I’m stunned by how many people believe capybaras come from Australia, for instance. (They come from South America.)

Here’s a link to the article. You can check it out first and try to guess why it is misleading. It’s short. Or you can read Miss Picky’s summary first and check out the article after.

Here’s Rodrigo. He was a handsome devil and this is a very nice portrait. Ten is, indeed, a venerable age in captivity and Denver Zoo took good care of him in order to have reached it.

“We are sorry to announce the passing of Rodrigo, our beloved capybara. Rodrigo’s keepers had to earn his trust when he joined us in 2011. By the time he passed, he’d let keepers scratch his back. At 10 years old, Rodrigo was at the upper end of the species’ life expectancy.” – twitter @denverzoo 7/30/2020

That’s what the Denver Zoo announced, via their Twitter account. It’s a perfectly reasonable statement, and the photo above was posted with it. Also very appropriate.

Things go sideways in the article I linked to. Here’s the title:

This is what the article states:

“Rodrigo was 10 years old, and according to the Denver Zoo, that’s about as old as capybaras get to be. They also, apparently, get very big.”

We know from scientific studies¹ that capybaras in the wild live to be about four years old. Sometimes a five year old specimen is found and discovering a live six year old in the wild is almost unheard of, but a few are out there. The 2015 Capybara Care Manual² states that “The average lifespan in their natural environment is 4 years; however they may live up to 10 years.” Ten years is probably typical for zoos. Dobby lived to be nine and a half in spite of serious health issues during his last years. The ROUS Foundation knows of one experienced breeder who had a capybara attain the age of eighteen! Though that seems incredible, when she retired from capybara breeding she had five animals between the ages of fifteen and seventeen years! Because of that, we know that ten years, while respectable, is not remarkable. Not a grievous error in the article, but the average captive lifespan of ten years is unsubstantiated and misleading. Until more scientific research is available, ten years will be considered old.

Now, let’s do the “big” part of the information. The reporter, Dave Jensen, is curious about how big capybaras get. He googles some stuff and sees a video of our friend JoeJoe with a Border Collie. He knows Border Collies because his brother has one. This is a valid size comparison, right?

We know JoeJoe, though. JoeJoe was a very small capybara due to early health issues. He was about three years old and 55.2 pounds (25kg) in this video. Three year old capybaras are generally around 100 pounds (45kg). A full grown capybara (4-5 years old) can reach 125 pounds (57kg).

This is the video of JoeJoe that Jensen chose to post in his article:

Dobby topped out at 136 pounds (61kg). A Border Collie is not a suitable size comparison, unless you are talking about a young capybara, maybe around a year old. When Jensen referred to Rodrigo as a giant rodent, he was mature and probably around 125 pounds. That is a giant rodent! 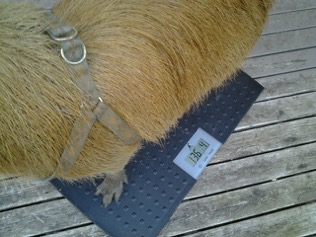 So, the article is misleading, but not so that the average reader would notice. When you add this article to all the other ones out there, suddenly you have an Australian rodent the size of a Border Collie, with a tail, maybe square poop, living in caves.

Here is a link to the article: