Japanese people are enamored of capybaras. Well, isn’t everyone? Of course we are. For some reason, here in the USA, we stop short of displaying them in cafes as entertainment. One of Dobby’s fans, we’ll call him Frank, visited Owl Cafe Asakusa. The capybara wandered about as he presumably drank tea and ate cookies. He also took some photos which he generously shared with me.  I have reservations about capybaras being kept indoors in unnatural settings, but this one is presumably a rescue, and there are certainly worse situations than this cafe. Capybaras are quick to express their displeasure, and this one seems happy to receive attention.

Frank was walking around Asakusa (a very touristy area in Tokyo) with his girlfriend, and they came across a young woman with an owl on her shoulder (wow, that had to hurt!) She was holding a sign advertising the cafe and when they saw that it had a capybara, they decided to check it out.

The whole place was filled with animals including owls, flamingos, and desert foxes. The animals were rescued from zoos and other cafes that couldn’t keep them anymore. Frank said the animals appeared healthy, considering how many animals there were in such a tight indoor space, but it was very clean and there was no odor. It looks decent enough to me and the capybara looks good. Dobby would have chewed the cord on that heater, so this is a nice capybara, not the naughty kind like I got.

The capybara was eating hay and some lettuce or cabbage while Frank was there. He got to pet the capybara who was very gentle and tolerant of the attention though it must have been a stressful environment, as she was packed in with all the other animals. Frank didn’t see her interacting with the other animals but she seemed to not mind them. She ate, slept by the heater, and took a slow walk around the place.

By now I was pretty curious about this place. As it becomes increasingly clear that I will be unlikely to visit Japan during this lifetime, I did the next best thing. I checked it out on the internet. I found about a million photos, which I have blatantly stolen to decorate this blog post. (I have permission to use Frank’s photos.)

Here is your token owl photo. Actually, they have several owls and millions of owl photos are posted, so check it out if you like owls. Nothing I have read about owls makes them a suitable “cafe pet” but here you go. They have a bunch of them, looking quite dapper. I’m guessing these owls are too disciplined to cough up a pellet into your tea.

Here’s a bunch of photos I nabbed from the internet. 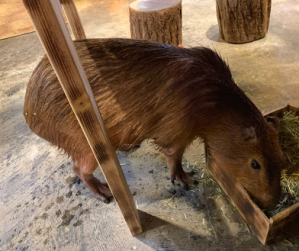 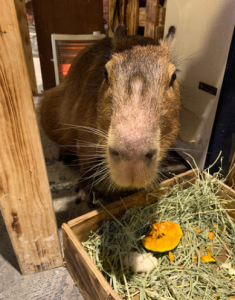 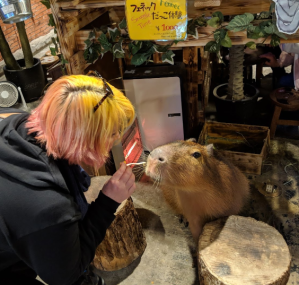 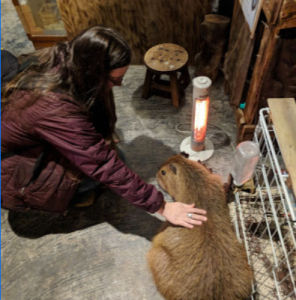 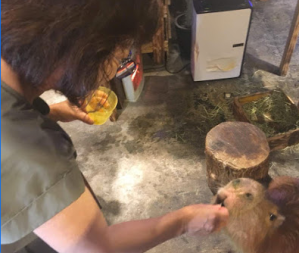 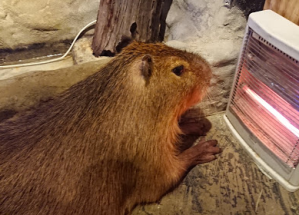 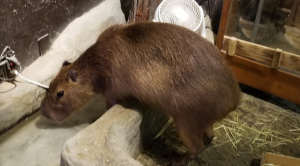