Gari received his veterinary care at Texas A&M University, and was invited to attend the Veterinary School 2012 Open House as a celebrity guest! I was invited along as assistant wrangler. 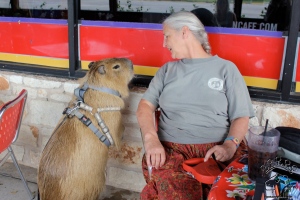 Note the dampness on Gari’s back.

Because the plan involved a bit of travel and harness-work, we took a reconnaissance trip to lunch. Even during a very short car ride Gari would become nervous and get sweaty. He was well behaved at our destination, though. He was curious and headstrong, but between the two of us we could manage him well enough.

It was always easy to get him out of the car and into the yard.

Our next car trip was to the Open House, two hours away. I got to ride in the back with Gari and feed him romaine while Melanie drove. Gari was a nervous eater, so he ate his way through several heads of lettuce.

Unsure of our intentions at the veterinary school, Gari took to the water like a wild capybara hiding from jaguars.

It has been said that capybaras can stay underwater for five minutes. Gari might have gone for the record if this wading pool had been deeper.

Finally coming up for air, Gari decides to explore.

We had made a display of capybara basics because, in our experience, most people have never even heard of them.

Do you see any familiar faces?

People came through in manageable groups and Melanie talked about Gari and capybaras in general.

There is a low barrier to keep the public out of Gari’s space. (Note the gray rat nose tickler from home that we attached to the barrier.)

There were a lot of young people, groups like Girl Scouts, and random interested families. When Gari realized the people had come to admire him, he rose to the occasion and approached to be petted. 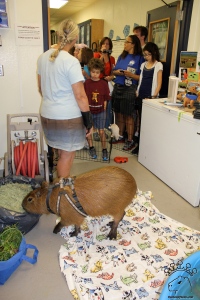 We brought about a week’s worth of food for the mighty nibbler. 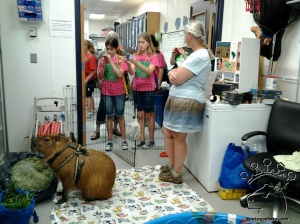 Gari was always a good eater.

Gari was a good boy, but after a while, even good boys get curious.

Looking for the Wizard of Oz.

Plenty of grass outside, but the best grass is in a bowl in the kitchen.

We had picked so much grass for the day that he gleefully ate a bowl of leftovers inside.

See how the grass is always greener in a bowl in the kitchen?

He was happy to be home, but I think he was very proud of his accomplishments as the World’s Most Famous Capybara Ambassador.

Go ahead and have some corn. You deserve it, Gari! 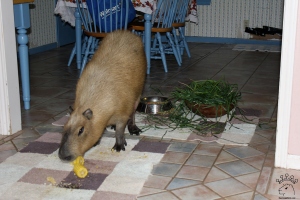 Garibaldi Rous died on February 16, 2014, just shy of his fourth birthday. This was the third of my four visits with him.