A woman who found an injured baby capybara in her backyard has turned it over to local wildlife authorities so that it can be released back to the wild. Her family is heartbroken, and just look at these photos! He’s all dressed up and has a farewell cake in one photo. The other shows little Jorge, in the buff, and looking very perky with very large expressive ears. We wish him well.

If you are thinking of moving to an area where wild capybaras just wander through your backyard, Roraima is located in the extreme north of Brazil, in the Amazon region. It shares borders with Venezuela and Guyana.

The story that follows is a a rough translation from the Portuguese. Follow the link at the bottom to the original article. 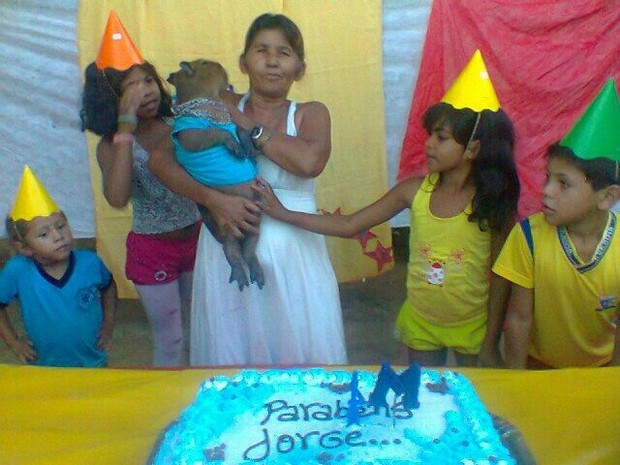 A capybara approximately four months old was delivered on Friday to the Military Police of the municipality of Mucajaí, within 51 kilometers of Boa Vista. The animal, named Jorge, was living in a residence and was treated like a family member, according to police.

The mammal was sent to the Society of Environmental Policing in the capital. According to Maj. Charles Matos, the housewife, Mary Grace Silva, 55, handed over the animal because of information that he could get aggressive when he reached adulthood.

“She went to the police voluntarily. At the time of parting, there was a lot of commotion. Sons of the woman cried enough, because they clung to the capybara,” said the Major. Animals may be returned to nature after being treated in a Screening Center.

Mary Grace said that she decided to take care of the animal, a very young capybara, when it was found injured in the backyard. She said she had the greatest love for animals, but many people said that she could be fined if the police found out.

“The house is empty. My five children and ten grandchildren are sad too. One of my daughters has not eaten anything all day. Jorge slept in my bed and took a bottle three times a day,” she said.

The capybara was referred to the Center for Wildlife Screening of the Brazilian Institute of Environment and Renewable Natural Resources (IBAMA) in Boa Vista.

The original story, in Portuguese, may be found here: