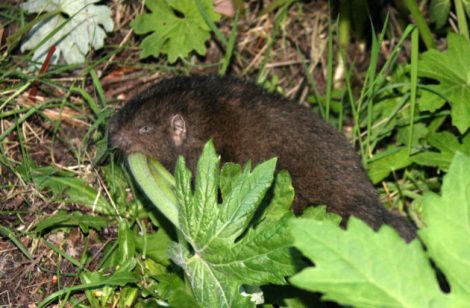 “The mountain beaver is a rodent like no other. Just don’t call it a living fossil.”

If you read Prince Dobalob Builds a Zeppelin, you have already been introduced to a Mountain Beaver. In the story, the butler, Kipling, is a Mountain Beaver. The book features many rodents, but Aplodontia rufa is arguably the most obscure of them. I run into lots of people who are unfamiliar with capybaras (obviously not close friends of Dobby!) but nobody seems to know what Mountain Beavers are. That they are commonly found in the Pacific Northwest has not contributed to the local knowledge base. People here simply have no idea that they exist. And that’s why I included Kipling in the story.

As a Landscape Architect, I once had a run-in with a mountain beaver colony on a residential job. The contractor refused to plant the azaleas and rhododendrons- a favorite snack- until the hungry rodents were relocated. I live-trapped them using willow as bait. Not long after, a friend contacted me because one had frightened her mother on the patio of her waterfront condo. The ravenous beast had bumped her leg while hauling off the last of the mysteriously disappearing azaleas. They have notoriously poor eyesight. Once more with the live trap and willow.

It’s too wet in my garden for mountain beavers, but there is a fellow six blocks from here with a lovely wooded slope full of them. He cusses at them and spends a lot of time trying to get them to move along. I keep hoping they’ll show up here with their belongings tied up in a kerchief so that I can fashion them a condo in my dryest corner.

When I lived out in the country, twenty years ago, I used to catch them swaying at the top of little alder saplings, snapping off the tender leafy top branches, dragging them into burrows. I have heard they are shy but I think most people don’t know how to carry on a non-threatening conversation with wildlife. I just heard a mallard call me outside. She’s nesting and drops by each afternoon for a little snack. In her case, she has taught me what her conversation means. She’s been hanging out here about fifteen years, so we have some history. In her case, she learned how to talk to me!

Anyway, I ran into this rarest of all articles, and I had to share it. Do you have Mountain Beavers where you live? If you live up here near me, you probably do.

Link to the article is here: The Mountain Beaver That Is Not A Beaver – Cool Green Science