How is our PandaBara doing? She is doing great! Or he is doing great, we still don’t know for sure, but then, unless you are a capybara in search of a companion for moonlight walks on the beach, does it matter?

What does a capybara do all day? This one eats. PandaBara has had a healthy appetite since she arrived here in early January.

I would eat that food, too!

Sorry, I didn’t mean that I was going to take your food away.

Everyone thinks all capybaras look alike. PandaBara has light brown eyes, not dark brown like Dobby’s eyes. Some capybaras have blue eyes. They all have lovely eyelashes. 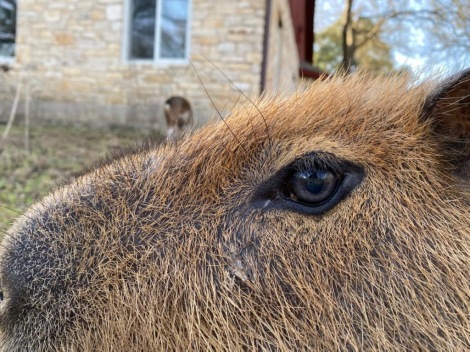 She wants to show us something at her new house.

Now that the weather is cooperating, she enjoys sitting around in her pond. I wonder if she knows about the snapping turtle yet.

She has something else she wants to show us. 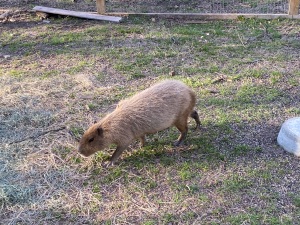 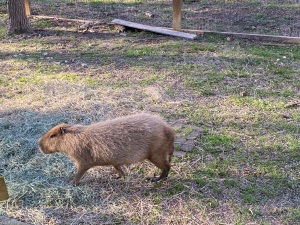 We should have known it would be more food. This is a big pile of bamboo at the bottom of the steps up to the house.

PandaBara doesn’t live at a zoo so someone has to sneak down the road and cut down a few bamboo stalks under cover of night. 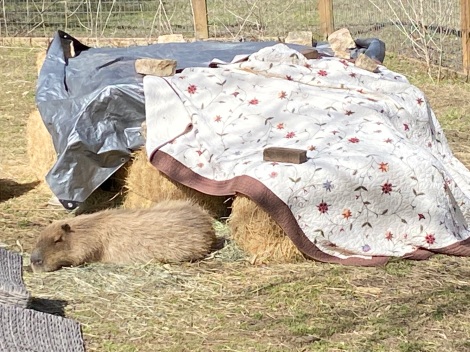 Naptime is all the time.

You might remember this straw bale den from a couple months ago. The temperatures dropped at night, and she spent the night on a heated pad tucked way into this maze of a hut. Now that it’s warmer, she has discovered an intruder. 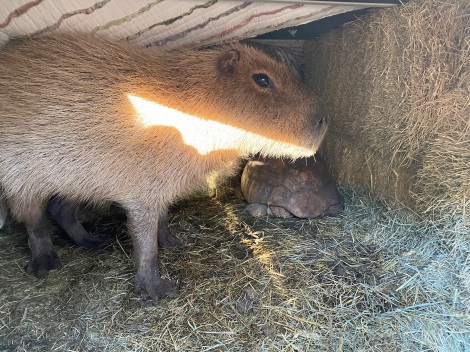 Get this thing out of here!

It sounds fun to share a home with a tortoise, but there are certain disadvantages.

This is not how a doorstop is supposed to work.