When I meet people savvy enough to know that capybaras are from South America (and not Australia), they love to point out that people down there eat them. That may be true in Venezuela, but in Brazil they are protected. Protected and beloved. Sadly, no amount of protection can keep them safe while crossing busy highways. Like our deer, capybaras are large enough to be a hazard to vehicles and passengers, but small enough to become instant fatalities. If they survive an altercation with a car and someone brings them to a vet, they can frequently be put back together.

This is one of the more ambitious reconstructive surgeries I have run across. One presumes her rehabilitation will include lessons on proper roadway crossing.

Of course, the article is in Portuguese. I will run it through Google Translate for you and provide some random commentary. There’s a link at the end so you can read the original Portuguese if that sounds like fun to you. A year of Duolingo Portuguese and I’m still clueless.

Currently, the animal undergoes ozone treatment sessions to speed up the recovery process. 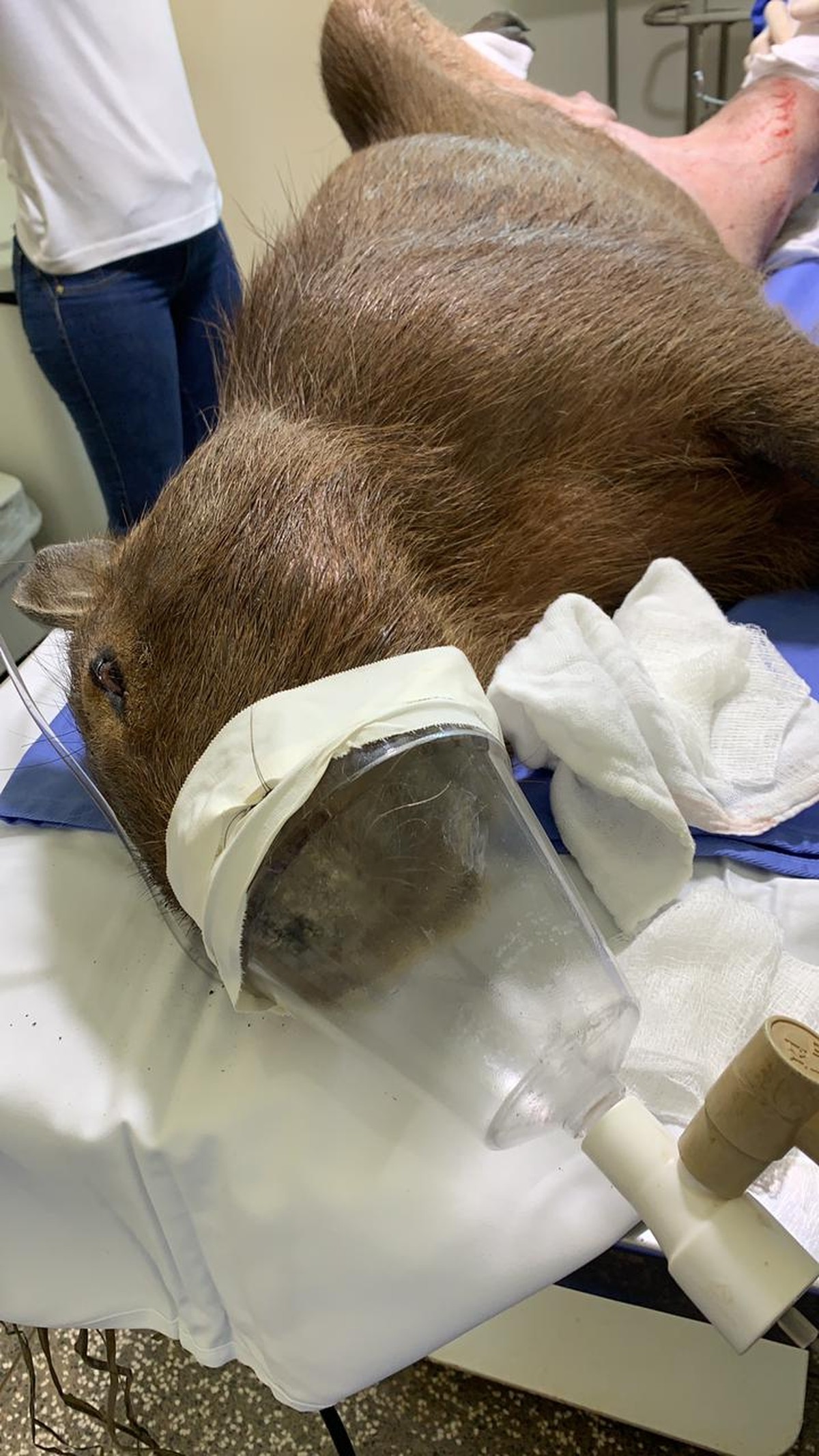 Capybara was rescued and sent to a veterinary clinic — Photo: Rota do Oeste [West Route]

A capybara was rescued with multiple fractures in the hind leg on the BR-163 highway, in Rondonópolis, 218 km from Cuiabá, on June 14, and underwent limb reconstruction surgery with a pin and metal plate. The animal now undergoes rehabilitation to be released into the wild again.

According to the concessionaire that manages the BR, the animal was found injured in the central median of the road. The suspicion is that he was run over and was unable to return to the forest.

The veterinarians responsible for the treatment, Tayomara Heiderich and Lara Faria, said that as soon as the capybara arrived at the clinic, she underwent an X-ray, which showed that the limb had multiple fractures.

Then, the animal was referred to an orthopedic specialist.

According to Lara, the technique of treatment with an internal implant was chosen, using a steel plate and placing an intramedullary pin because it is a wild animal.

“The limb was fractured in several parts and there was no way to align and immobilize it in a simpler way. We believe that the recovery will take between 60 and 90 days and then she will be able to return to nature”, he explained.

According to the team responsible for the treatment, the post-operative period is important for the recovery of the animal, which, naturally, is more stressed outside its natural habitat.

Capybara’s next steps for recovery depend on medical discharge. As soon as she has clinical conditions, she will be taken to a shelter in the middle of nature, where she will undergo the reintroduction process.

Rota do Oeste reported that, this year alone, it has rescued and treated nine animals, six of which are wild.

It’s all about education, isn’t it? Here are some more capybaras crossing a road. These are extremely intelligent animals and there’s no excuse for not training them to use safe crossing areas. Here’s another one.