What the heck, right? Here’s the “translation” of the title:

witness in the city, go to captive

at the end of last year 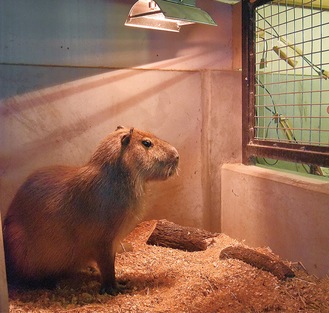 Just in case you don’t get an English translation when you click on the links below, here’s what the story looked like on my computer:

“ The capybara, which had been wandering around Shonan from last summer to the end of the year, has been bred at the contact zoo at Hiratsuka General Park since January.

A series of sightings occurred at Tenjin Park in the city and Koidegawa in Chigasaki, and they were captured at a private house in Oiso on New Year’s Eve. He was returned to the owner of Fujisawa City, but after that the owner consulted the zoo to pick it up and the garden responded. While wandering, it was called “Kappa” on the net, but his real name was “Choco”. At present he has a strong appetite and gives sweet potatoes and flatters. The habit of trying to find an escape route somewhere on the fence is as usual. Consideration of facilities is also necessary, and general disclosure is undecided.

Mayor Katsuhiro Ochiai, a mayor of Hiratsuka, commented at the conference, “When I learned of the capture, I thought that this year was a mouse, so I thought I should use it as a Toshigami.” “A very cute animal. Capybara is a rodent and rodent.”

Apparently what we had here was another walkabout capybara. But I’m not sure. Capybara is the only word I recognize in Japanese.  カピバラ  Can you spot it in the title?

Anyone out there fluent in Japanese? Can you clean up the translation? If you are the first to send me a plausible translation, I’ll edit this post to include your version, and I’ll mail you a postcard or something. Two links follow: the English one, and then the same one in Japanese.