Capybaras are commonly found throughout Brazil. That doesn’t necessarily mean that it is common to see them! They live near lakes, rivers, and streams but tend to be nocturnal in areas populated by humans. Like our deer, everyone has seen them, but if someone asked you to show them some deer, you would probably have a hard time finding any.

We drove west from Rio de Janeiro toward Parque Municipal Ecológico de Marapendi, where capybara sightings have been reported. It’s always encouraging to see them on the sign. (They are called capivara in Brazil.) 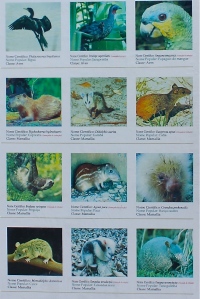 We walked around with some naturalists, but only saw caiman and a few birds. 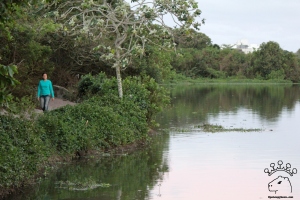 Marapendi is a big lagoon

We walked down to a bridge where a female capybara had just been seen, but she was gone. 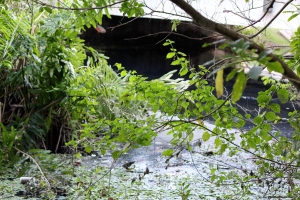 There was a lot of capivara-browsed vegetation in the area. Marapendi hasn’t much grass, so they eat mostly water plants and shrubs.

Maybe she was holding her breath down there

Our naturalists were very disappointed that they had no capybaras to show us, but they had a Plan B for us. Nearby Parque Natural Municipal Chico Mendes would be having a “night walk” in about an hour and they invited us to join them!

We moseyed around the Interpretive Center while the sun went down. We learned that Marapendi and Chico Mendes are connected by a narrow canal. 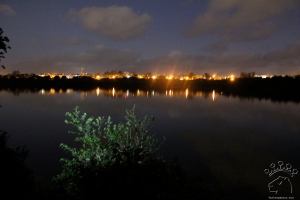 Chico Mendes looks a lot like Marapendi but it is much smaller. There were dozens of caiman  and their eyes glow when the flashlight hits them. Not that you can see them in this photo, but you can imagine pairs of staring eyes.

There were mutilated shrubs everywhere, so capybaras had been there. We gave up standing by the water and headed back to the Interpretive Center. Then we saw one. My photo is absolutely representative of what I saw: a blur and a rustling. I only saw it because the naturalists suddenly sprung into action, blocking her path, herding her toward us, Nathalia deftly capturing the event on film. 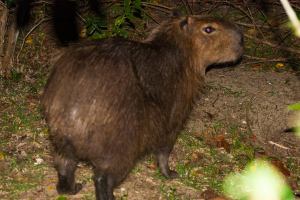 A triumphant evening! I owe a big THANK YOU to the naturalists at both parks! I think they have all friended Dobbye Winnick on Facebook and so have seen the hilarious side of wild and crazy pet capybaras, to augment their understanding of naturally wild ones!

One response to “Looking for Capybaras – Brazil, part 1”